It’s OK to be Smart host, Joe Hanson, explains how cosmic rays appear to have a longer life than they should because they travel at a speed close to the speed of light (time dilation).

Have you ever notice the vapour trail left behind after airplanes jet through the air?

Well in 1932 Carl David Anderson announced his discovery of the positron, a positively charged electron. A discovery that was made using a cloud chamber, a relatively simple device, that can produce contrails when particles pass through the vapour sealed within the cloud chamber container. END_OF_DOCUMENT_TOKEN_TO_BE_REPLACED

This isn’t the flippant question it may look like.

Taking that back another step: there are four fundamental forces of nature. The two of them that you are extremely familiar with are the electromagnetic and gravitational forces. These are long-range forces; they act over large distances. The other two, the weak and strong forces, act on the atomic and subatomic scale, so you only encounter their effects in a very indirect way. The strong force is particularly important as it’s the force that sticks the protons and neutrons in the nuclei of atoms together. (You wouldn’t otherwise expect nuclei to stick together; the electromagnetic interactions are between positively…

Click on the link for a test on Subatomic Particles.

To get the most out of these quizzes first learn and memorise the difference between the subatomic particle types, their composition and examples of each. Then test yourself. 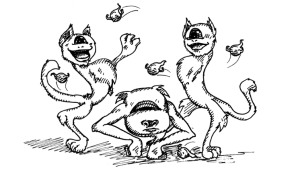 Two up quarks, one down quark, and a bunch of gluons… that’s a proton!

Particle physics is what they do at CERN. It’s why they built the Large Hadron Collider, that big experimental facility built underneath France and Switzerland that fired up a few years ago and managed not to destroy the whole world with a black hole.

The Large Hadron Collider remains the biggest, most complicated piece of science equipment ever made.

… Which seems almost ironic, as it’s made to study the tiniest, most basic pieces matter is made of.

That’s what particle physics is all about: the study of the bits of matter that are smaller than atoms. It’s a weird world down at the subatomic level. There are forces that act over such small distances that you can’t detect them on our scale, but which are absolutely crucial to keeping the fundamental building blocks of everything…

Particle physics uses something call the standard model, which describes the fundamental particles, and how they behave and interact.

It divides the fundamental particles into three families, the quarks, the leptons and the gauge bosons… and one loner, the Higgs Boson.

There are six different quarks, which get organised into three pairs because their properties follow a bit of a pattern.

They have slightly odd names: up & down, charm & strange, and top & bottom.

Quarks have a mass. If you could somehow get them to sit still and get on a…